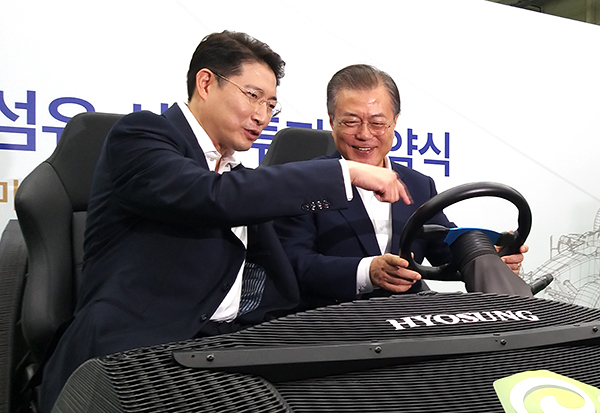 □ Plans to increase its annual output to 24,000 tons by 2028 with a total investment of KRW 1 trillion by 2028
Hyosung laid out this vision at an “agreement ceremony for a new investment in carbon fiber” at the carbon fiber plant of Hyosung Advanced Materials in Jeonju on August 20.
Under the agreement, Hyosung will invest a total of KRW 1 trillion in the carbon fiber business by 2028 and expand its annual production capacity from the current 2,000 tons (1 line) to 24,000 tons (10 lines). This would be the largest capacity of a single plant in the world. With the first expansion underway, the company plans to complete a carbon fiber plant with an annual capacity of 2,000 tons in January 2020 and begin full-scale production in February.
When the addition of 10 lines is completed by 2028, Hyosung’s global market share will rise from 11th (2 %) as of 2019 to 3rd (10 %) in the world. Employment is also expected to increase significantly from the current 400 to more than 2,300 new jobs by 2028.
The event included △ an “agreement ceremony for facility expansion and investment support” between Hyosung and the government and local municipalities, including Jeollabuk-do and Jeonju and △ an “alliance MOU ceremony” aimed at strengthening cooperation including joint testing between the Ministry of Trade, Industry and Energy, Hyosung, and relevant companies, such as Iljin Materials, and Korea Aerospace Industries (KAI).

□ Carbon fiber, which is lighter but 10 times stronger than steel, is a “staple of future industries”
Carbon fiber is a “new dream material” that can be applied to all industries where iron is used, from internal and external materials for automobiles and building reinforcements to sports and leisure sectors and advanced future industries such as space aviation. Carbon fiber weighs one-fourth the weight of steel but is 10 times stronger and 7 times more elastic. It is called a “staple of future industries” because of its superior corrosion resistance, conductivity and heat resistance.
As a strategic material used in aviation, space, and defense, it is difficult to transfer technology as well as develop it independently, which is why only a few countries have such technology. Hyosung became the first Korean company to develop carbon fiber "TANSOME®" based on its own technology in collaboration with Jeollabuk-do, Jeonju and the Korea Institute of Carbon Convergence Technology in 2011 and has been manufacturing products since 2013.  It marked the world's fourth development after Japan, the U.S., and Germany.

□ Infinite expandability of upstream industries including the hydrogen sector
Carbon fiber is also regarded as a key material in the hydrogen economy.
The government announced a roadmap to revitalize the hydrogen economy in January and said that it will use hydrogen, which has wide-ranging economic and industrial impacts, as its future growth engine.
To this end, the company plans to expand the number of hydrogen cars from around 1,800 in 2018 to about 81,000 by 2022 and around 6.2 million by 2040. Hydrogen cars are gaining attention as future eco-friendly vehicles that reduce carbon dioxide emissions thanks to their lightweight.
Carbon fiber is a key material for hydrogen vehicle's fuel tanks and is essential for the safe storage, transportation and utilization of hydrogen energy. The hydrogen fuel tank is a cylindrical container made of plastic, which is wrapped with carbon fiber to increase its strength and stability. Carbon fiber is a core material for hydrogen fuel tanks that are light but must withstand hundreds of times higher pressure than normal air.
The carbon fiber market for hydrogen fuel tanks is expected to grow more than 120 times by 2030.


*About Hyosung
Hyosung is a South Korean industrial conglomerate, founded in 1966. It operates in various fields including heavy Industrial machinery, advanced materials, chemical industry, and textiles. Its CEO is Hyun-Joon Cho and the headquarter is in Mapo-gu, Seoul. Hyosung has a global network of about 90 sites in the U.S., China, Europe and other parts of the world, with about 30,000 employees. Tire reinforcements, spandex, and seatbelt yarns are No.1 in global market share.