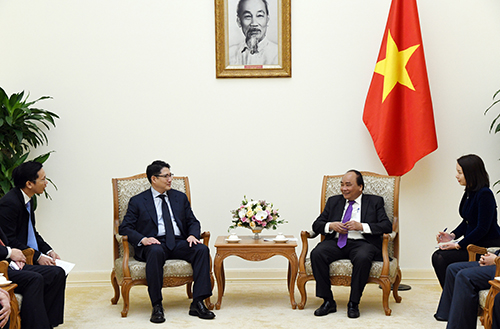 Hyosung Chairman Cho Hyun-joon is utilizing Vietnam as a global production base for producing all its core products, such as textiles, industrial materials, chemicals and heavy industry to make inroads into the global market.

“Hyosung, exporting to more than 60 countries around the world, is the largest investor carrying out various businesses in the northern, central and southern regions of Vietnam, and Hyosung Vietnam will become our outpost for advancing further into the global market,” said Chairman Cho at this meeting. “We are planning to expand our business not only in spandex and tire cords, our leading global products, but also in chemicals and heavy industry.”

“Recently, Vietnam made it to the finals in the AFC U-23 Championship. This symbolizes the successful cooperation between Vietnam and Korea,” he added. “I hope that Hyosung and Vietnam will closely cooperate with each other, and Hyosung’s projects will contribute to the overall economic development of Vietnam.”

Since Hyosung established Hyosung Vietnam in the Nhon Trach industrial complex near Ho Chi Minh City in 2007, the company has invested about $1.5 billion so far. Hyosung is the largest investor among the Korean companies in the Nhon Trach industrial complex. On a 1,200,000m2 site, the size of more than 90 soccer fields, it is producing its core products, such as spandex, tire cords, steel cords and motors, and operates with more than 7,000 local employees.

Hyosung Vietnam implemented an integrated production system for spandex and tire cords, and maximized production efficiency, and it is now operating as a forward base for advancing into the global market through continuous expansion. Since 2008, a year after its establishment, Hyosung Vietnam has been profitable for ten consecutive years, and of particular note, its operating margin has exceeded KRW 1 trillion and 20% respectively since 2014.

At this meeting, Chairman Cho expressed a strong will to quickly invest in chemicals and heavy industry, such as polypropylene and motors, and presented a specific blueprint.

Hyosung invested a total of $1.3 billion in Ba Ria Vung Tau in the southern part of Vietnam last year, and is carrying out the investment procedure for construction of the polypropylene plant, the DeHydrogenation (DH) facilities for this plant and the LPG storage tank.

Hyosung is also considering constructing an additional production subsidiary in Quang Nam in the central part of Vietnam. If this project is completed, Hyosung Vietnam will have attained a production base for producing the products in all its business divisions, targeting the global market both in name and reality.

Hyosung is expecting to realize the export competitiveness of its domestic production bases by increasing investments in Vietnam. Hyosung is planning to convert the Yongyeon propylene plant, whose capacity was increased by 300,000 tons last year, into a plant for producing PP for pipes, a high-value-added product, and dualize the new propylene plant in Vietnam by producing general products as well in an effort to secure cost competitiveness and profitability, and maximize synergy effects.

As for motors, Hyosung is planning to make half-finished products in cost-competitive Vietnam, bring them to the Changwon plant in Korea, make finished products, and export them so that the productivity of domestic plants will be enhanced and exports will be increased as well.

Chairman Cho also discussed infrastructure projects in Vietnam with Prime Minister Phuc. Vietnam urgently needs to build infrastructure, e.g., power, roads, ports and urban development, due to its rapid economic development. Chairman Cho delivered a clear message that he is confident that Hyosung will be able to capitalize on its technology and know-how in power transmission and construction to successfully carry out infrastructure projects involving Vietnam infrastructure. In particular, he said that he would help Vietnam quickly become an exporter of extra-high-voltage transformers, rather than an importing country, through technology transfer.

Hearing this, Prime Minister Phuc expressed his will to fully cooperate with Hyosung, and said, “I hope that Hyosung will become a strategic partner with the state-run transformer manufacturer of Vietnam.” Also, when Chairman Cho suggested that a Korea Investment Forum would be held so that Korean companies could increase their investments, he stated that he would positively consider it.

In addition, they discussed IT businesses, such as ESS, ATM, electronic payments and Fintech. Chairman Cho emphasized the importance of manufacturing innovation, e.g., combining existing manufacturing processes with IT technology like big data. In the rapidly changing global economic environment, he said that he expects Vietnam to actively engage in IT businesses at the governmental level to proactively respond to it, and he hopes that Hyosung, which possesses the best technologies in Korea, will have more businesses opportunities in areas such as smart factories, renewable energy, ATMs and electronic payments.

This is the second time that Chairman Cho met with Prime Minister Phuc since his last meeting in 2016. They have maintained friendly relations since then.

Chairman Cho has been saying that the company must be prepared for the lower cost competitiveness of its plants in China due to higher labor costs and tougher regulations, and taking the lead in the Vietnam project since the mid-2000s.

Meanwhile, Chairman Cho is expanding his management-by-walking-around, e.g., reinforcing the global network with a focus on its core markets. Since his inauguration as chairman, in addition to Vietnam, he met with the party secretary of Quzhou, Hebei, China last July, and discussed Hyosung’s expansion of the spandex business, and in October, he attended ‘Intertextile 2017,’ the world’s largest textile expo held in Shanghai, China, and listened to the feedback of customers in a bid to reinforce global management.